Well, we’ve only gone and done it!

The Diving Museum in Stokes Bay, Gosport is now a fully Accredited Museum.  What does this mean? Well, it means that we have been formally assessed and audited and found to have met the gold standard criteria set down by the Arts Council which is designed to challenge Museums to be ‘the best they can be’.  It puts us at the same level of professionalism as over 1700 museums across the UK.
These standards are divided into three areas of museum management; Organisational Health and Governance, Collections Management and Users and their Experience.  Situated in No2 Battery, in Stokes Bay, a Grade 2* listed building, it gives us the added responsibility to inform and educate our visitors, not only about underwater endeavours but also the heritage of the building.
As you can see, our team of volunteers are delighted that their hard work over the last 6 years has been recognised.  Supporters, donors, and visitors can now have added confidence that we are a museum with a sustainable future, run by committed volunteers determined to preserve our diving heritage, conserve our collection, support education and provide an interesting and enjoyable experience, valuing each and every volunteer and visitor.

The picture shows some of the many members who were involved in the Accreditation process, with team leader and Society Vice Chairman Mike O’Meara holding the precious document. 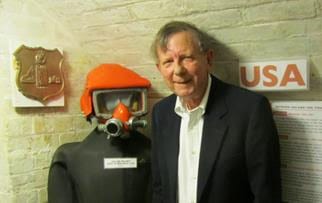 Sadly we have to record the passing of Jim Vorosmarti

James Vorosmarti received an AB degree in Biology from Lafayette College in 1957, and an MD degree from Jefferson Medical College in 1961.

Following graduation from Jefferson he served for 26 years in the U.S. Navy. After internship at Portsmouth VA Naval Hospital he completed Diving School, Submarine School and Nuclear Power Training, served in the USS Jack and USS John Adams, followed by a tour as Senior Medical Officer at the Submarine Base, Pearl Harbour.

He was next assigned to the Navy Deep Submergence Project and was an aquanaut on SEALAB III, after which he completed a post-doctoral fellowship in Environmental Physiology at the University of Buffalo. He was selected as an Exchange Officer with the Royal Navy and directed the RN program in deep diving research for three years at the Institute of Naval Medicine and Royal Naval Physiological Laboratory. While in this capacity he was also the liaison officer for medical research for the Office of Naval Research, London. On return to the United States he was assigned as the Executive Officer of the Naval Medical Research Institute followed by a tour as the Program Director for Diving and Submarine Medical research and then as the Commanding Officer of the Naval Medical Research Institute. His last assignment was as the Special Assistant for Medical and Life Sciences in the Office of the Secretary of Defence. During his Navy career, Dr. Vorosmarti served on many national and international committees dealing not only with diving and submarines but also in areas such as biotechnology and organ transplantation.

After retiring from the Navy he was self-employed as a consultant in his field of Environmental and Occupational Medicine. He served as a consultant to the Office of Naval research, the University of Alabama School of Medicine, the Food and Drug Administration, the Office of Personnel Management and the Smithsonian Institution. He has been a consultant to several diving and oil companies abroad and in the United States and has been a frequent lecturer national and internationally. He is the author of many research publications, chapters in medical texts and served as the editor of Undersea Medical Biomedical Research and reviewer for other journals. Following his final retirement he continued to research and publish on the history of diving technology and history.

Jim was one of the Society’s earliest members and he delighted in his annual visits to attend the Society’s conference (to which he presented papers on two occasions) and the opportunity to renew acquaintance with the many friends he made here as an exchange officer. Over the last 3 years he donated a large quantity of books and papers from his personal library relating to diving medicine and technology to the Society’s library, shipping them over at his own expense. He was made an honorary member of the Society in 2003.

The picture is of Jim in the Diving Museum, Gosport, posing with a Heliox Helmet used in Sealab III