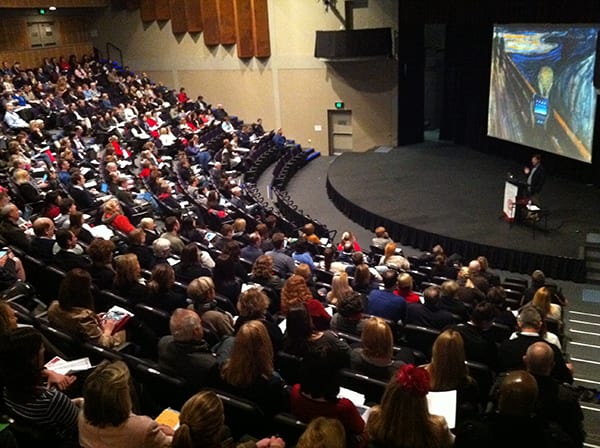 The Historical Diving Societie’s annual Conference on Diving History will take place on Saturday 19th October.  The venue is Subsea7’s ultra-modern office in Sutton, London, which has superb conference facilities and is readily accessible by road and rail.

As always we are looking to provide a wide-ranging view of diving history from speakers expert in their fields.

Full details and booking arrangements will be available shortly, so note the date and add it to your diary now! 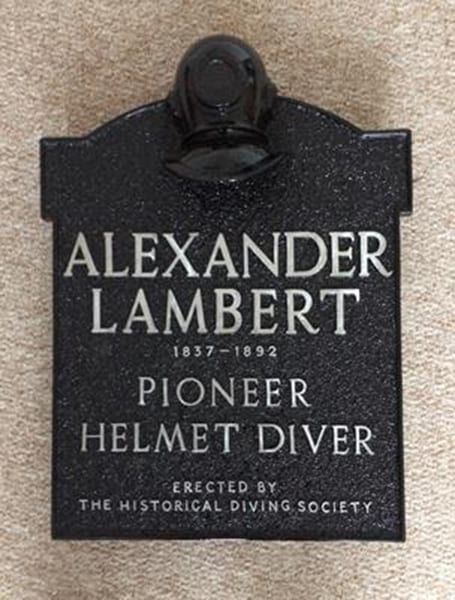 Readers will no doubt recall our previously reported story of how the grave of one of the most famous of Victorian divers, Alexander Lambert, was rediscovered in a somewhat neglected state and the subsequent decision by the society to set up a fund raising campaign so that the grave could be properly identified and restored.  The campaign was a success and a suitable plate has now been produced (see picture) and will be installed later this year.  Details to follow. 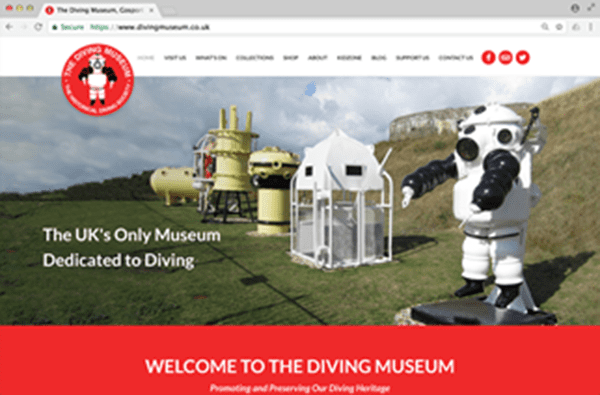 Are you keeping up to date with the Museum events?

The Diving Museum Newsletter focusses on events and other things of interest to do with the museum.  Be sure not to miss anything: email prdivingmuseum@gmail.com to get yourself on the mailing list. 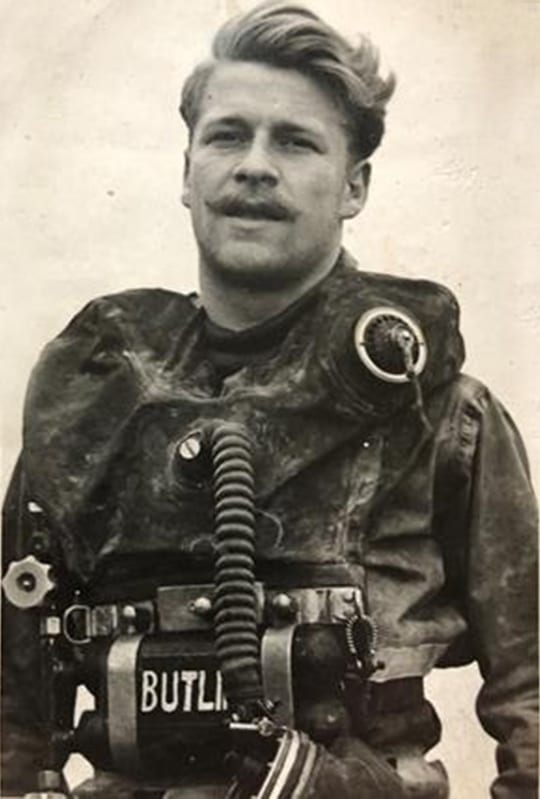 Society member John Ingram-Marriott’s father, Gordon was a WW2 commando frogman, trained for canoe and underwater chariot operations.  He lost his life in Wookey Hole in April 1949 and it is planned to commemorate his death on the evening of the 13th April next.  John can be contacted on 07900 171711 or at ingrammarriott@yahoo.co.uk

We are holding a remembrance event on Saturday, 13th April in Wookey Hole, Somerset, for my my father, Gordon Ingram-Marriott, (ex RMBPD, PO/X11487) who died 70 years ago

He joined the RM on the 28/4/1942 at the age of 17 and left 27/6/1946, aged 21 and subsequently was drowned whilst diving as a guest with the Cave Diving Group (CDG) in Wookey Hole on the 9th April, 1949, aged 24.
He was based  in various RM establishments including Teignmouth and Appledore and for a time was in a group led by “Blondie” Haslar, I believe in the RMBPD, and, amongst other activities, was involved with Sleeping Beauties.
I was fortunate to meet several of his ex – RM  colleagues some 20 years ago, thanks to the help of John “Boots” Allistone, including Bill Sparks, (Operation Frankton), Colonel Pug Davies, Commander Bill Ladbroke, Bill Sparkes (Op Frankton), Ltnt Stan Hurst, John Arnold, amongst others
Within the CDG, I was extremely privileged to have met the leader of the team that fateful evening – Graham Balcombe – who explained how my Father met his death.
The purpose of the event is to remember my father (I was 2 years old when he died), lay a wreath where his body was found and then to have a social get-together and buffet  for all who might like to come along – including family, friends, ex RM and members of the CDG.
As mentioned in previous messages – we would be extremely grateful if anyone was able to present an overview regarding the use and/or success of Sleeping Beauties.
We envisage a group of around 20 people for the evening

Suggested Timings:
7:00 pm – meet and drinks
7.30 pm- adjourn to the main cave
7:45 pm – buffet and Sleeping Beauty pitch (if possible)
9:00 pm – close
I have a mass of photos, manuscripts and memorabilia that I can place on show at the event on the 13th April and which could be placed on show within the proposed SBS Museum (as distinct from the RM Museum)
In conclusion – we would welcome as many ex Royal Marines as would like to come and to treat it as a social get together as much a commemoration

There is no charge for the evening or the Buffet, apart from the Bar.

Friday May 24th
For all who arrive a day earlier, we have reserved tables in a historic wine restaurant on Friday evening.
www.elselsburg.de

Saturday May 25th
Saturday afternoon at 14:00, we will meet in the restaurant “Tafel & Wein” near Neustadt.
During the afternoon there will be presentations of historical diving related themes. The final time table will be sent a few weeks before the event. The day will end with a dinner in the same location. https://www.tafelundwein.de/

For HDS Germany members only: Our general meeting will start a 10 AM in the same building. We will send a separate invitation with all information.

Sunday May 26th
We will meet for a vintage diving event at Lake Lingenfeld, where there will be a reserved area for you to exhibit your collection. This is your opportunity to trade, buy or sell historical
diving gear of interest. Our local diving club will be putting up tent pavilions to protect against the weather. The Restaurant is beside the lake and is a perfect place to have lunch.

VENUE
Restaurant Schloss Deidesheim
For all those who wish to stay until Monday we have reserved tables in Restaurant “Schloss Deidesheim” for the Sunday evening. Here you can enjoy the best Palatinate wines and
traditional local cuisine in an historical ambience. www.schloss-deidesheim.de/

Hotel
There are several hotels to chose from  in Neustadt.
www.hotel-palatina.com/en
Panorama Hotel: http://www.pr-hotel.de/en/
Achat Hotel: www.achat-hotels.com/hotels/Neustadt-Weinstrasse/
Hotel Tenner: www.hotel-tenner.de/
More hotels and pensions: www.booking.com/country/de.en
I will be happy to support your booking needs, just let me know. It is important to reserve roomsseveral months in advance, as we have many tourists in Neustadt during the summer.
A few weeks before the event, we will send you the final program with more information together with a list of attendees. 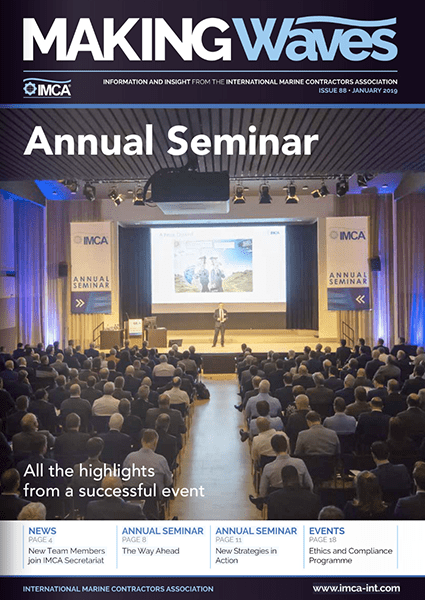 This issue covers the annual seminar, including the sessions covering diving-related aspects. 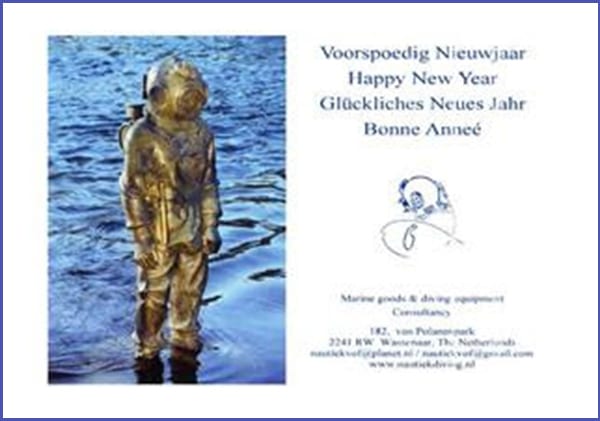 In 1992 a 2m bronze sculpture of a diver wearing Rouquayrol-Denayrouze apparatus was placed in the river Lot, the location of the first trials made of this diving equipment in 1865.  The sculpture was the outcome of talks between Jan de Groot of the Nautiek company and the Espalion city council and was based on a design provided by Jan.  Some years later the statue was torn from its base in exceptional high water and currents, but has now been reinstated to provide an important visual reminder to one of the most successful of nineteenth century diving apparatus designs.

Nigel Topham has had a Fenzy X3 since new, over 30 years ago, and would like to pass it on to a collector who can make good use of it.  It has had little use and is in good condition, but excludes the small emergency cylinder.

Nigel can be contacted on nigeltopham@hotmail.com